the astronomy picture of the day recently featured an amazing image of M78, the 78th object in the messier catalog.

M78 is a stellar nursery; a large cloud of gas and dust where new stars are born. the bright regions of blue and white show surfaces of gas clouds that are being illuminated by young stars. there are probably only a couple newborn stars that the produce enough light for the clouds to glow. the dark patches show dense dust clouds that block this light from our view. 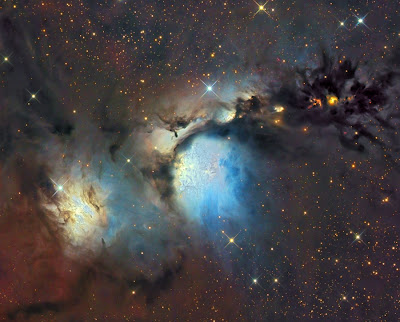 M78 is about five light-years across - it takes light five years to go from one side to the other! you can view M78 through a small telescope, but remember that the image you see is what this reflection nebula looked like about 1600 years ago because M78 is about 1600 light years away from us and it takes that long for light to travel from there to here!

Amazing photo although its a bit oversharpened in the middle!