last weekend was the last for my stint as the star party host for UT's old telescope. friday night's sky cleared up nicely, but only 2 people showed up to the party! so i had lots of time to look at mars, and the pleiades and take pictures of the telescope. the main lens in this refracting telescope is 9-inches in diameter and was crafted in the 1890s! the mount-structure was built in the 1930's and it has been there ever since! 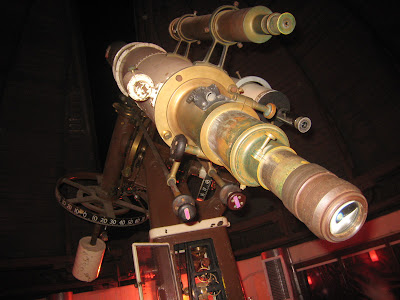 there are absolutely no electronic parts running this old beast. the telescope stays pointed at stars because of the mechanical clock drive. 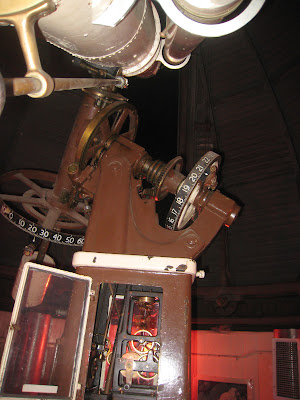 there's a weight that hangs down inside the mount and slowly unwinds the gears by the force of gravity. the system is calibrated to move the telescope very slowly in order to move the telescope in the opposite direction of earths rotation, but at the exact same rate. in this way, the telescope follows the stars as they travel westward across the sky and i dont have to constantly re-align the telescope every couple minutes!! every hour or so, i have to wind the mechanism.... if there are kids around, i let them wind it because they get *so* excited to participate! 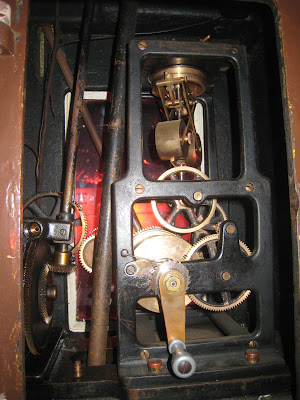 the kids also love the manual right ascension wheel that looks like an old pirate ship steering wheel. its a good thing i can lock this because kids always run up to it and try to turn it! 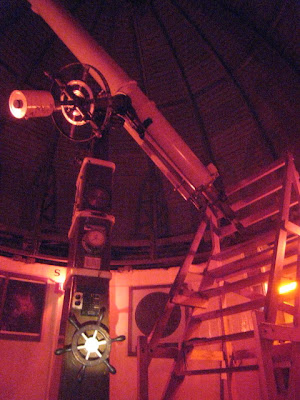 Look up! I noticed a huge and intensely bright comet last night. I've looked all over the internet but can't seem to find much. It's not Holmes and it seems too bright to be Tuttle. Any ideas?

Great pictures! Wow, I can't believe you actually have to wind it up to keep it going! Very cool post. thanks for sharing!